Navigate thru all the sub categories of the website

When those amazing, hardy and industrious pioneers came to this area, starting about 1881, Manitoba was the "Postage Stamp" province.

Travel was by foot, oxen or horses. Making the long trip for the few necessities they must purchase meant many hardships had to be endured. However, they were a very resourceful group, so the trips were not made frequently.

For a few years the post office carried on at DeClare, while Rutherglen and later McAuley also had post offices. It was not until the coming of the railway, that McAuley was adopted as the name of the village that served the settlement.

On November 1, 1899, "Little" George McAuley was appointed postmaster of Rutherglen post office, which was situated in the McAuley home. This remained the center for mail until a post office opened in the village. Mail was addressed to Rutherglen until 1906, when the postal address became McAuley.

Stage coaches brought the mail along the Fort Ellice Moose Mountain trail. The stage coach ran twice a week, Tuesday and Friday, returning the next day.

The first mail carrier was R.J. Anderson.  No doubt those early settlers looked forward to getting to "Little" George's for any word from the folks back home and a chat about the news of the day.

In 1902, The railway line was being laid and it was completed in 1903. The present village of McAuley came into being.

It was situated on "Big" George McAuley's land, so the C.P.R. named it McAuley. Some of the earliest buildings in the village included the North Star elevator, along with a house for the agent, Jim Duncan. This house is still occupied by Jim and Karen Coleman, and is situated on Railway Avenue.

B.B. Gilbert started the first store with Mr. Rae of Fleming, Saskatchewan, as clerk. Dick Miller's father bought the business with Dick in charge. In 1909, it was known as Miller and Smith.

The post office was in the back of the store. This building became known as the "Tin Store", and was later owned and operated by Mr. C. H. Holmes, the Davidsons, Mthie and Wells, the Airds and the Youngs at various times.

Bulger Brothers purchased the store in the early '40s.  Arthur and Gerry Bulger operated it until it was purchased by Ross Jamieson, who took over in later years.  It is now a storage shed.

Will Taylor ran a confectionery and ice cream parlour, with every kind of candy, treat and ice cream. This was the delight of shoppers.

The Cruickshanks also operated this business for a time. The building later housed Hawe's Confectionery. It was then occupied by Sam's Chinese Cafe. It is said that money changed hands over games of chance in the back rooms during this period. It later became known as the Werschler Place.

George had an electrical shop and "Ted" had a hairdressing establishment.  They occupied the upstairs premises as living quarters.

In 1904, the Robert Parkes moved to town and bought the elevator house.  He also built a livery barn on the north end of Railway Avenue (front street).

In 1905, Mrs. Orr built the front part of the boarding house. Will Taylor and his wife Jean ran the boarding house for a few years in the early 1900's. It was taken over by the Grists who ran it for many years.

The Grists were a very musically talented family, and many a walk down the streets of town was enhanced by the melodic tones emanating from the boarding house. Meals were served, travellers and permanent boarders catered to, though the years. Many were saddened when it was torn down in 1975, as the memories of good times associated with this building lingered on. 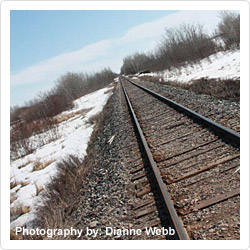