Navigate thru all the sub categories of the website

The Garden relies on funding and time from the community and the many present and past members of the area and visitors to the Gardens. 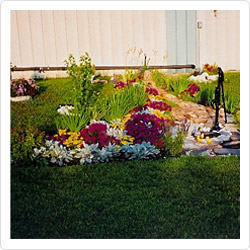 The RM of Archie has supported the efforts of the Manson Memorial Gardens since its inception.

The  metal and wooden benches were bought with kind donation received from former residents now living in Winnipeg.

The Manson Memorial Gardens would like to thank all those who have contributed to the project since 2003 be it time, money or taking the time to go and see what has been accomplished.

It is an ongoing project and we are very pleased with the donations that have helped us.

The "Manson Memorial Garden" idea started after Ruthanne and Lloyd Jacobs and J.D and Margaret Davis went driving one day and ended up at Foxwarren MB.

While there they went to see the Memorial Garden that the people of that community had made. On their way home J.D. said "too bad one couldn't be made at Manson."

The idea was circulated and was support by the community. The RM of Archie was approached to request permission to use the ground next to the rink and this met with approvement.

Digging started in the Spring of 2003 with layout of the beds decided soil was brought in to build up the beds ready for planting.

The background setting of the memorial Gardens is a row of Old Fashioned bed ends that Lloyd painted black and he and J.D. installed, these were acquired form local sales and donated by J.D. & Marg.

Along the front of the area are black posts with forest green caps with chains between them.

During the digging they found items such as horseshoes and other metal objects with a little research it was learned that there used to be a garage and blacksmith shops on the site.

The items found are being cleaned and will be on display in 2005.

Manson Memorial Gardens is located 7 miles North of #1 Highway on #41 Highway and 1/2 mile East on 77N on the West side of Manson Community Rink.